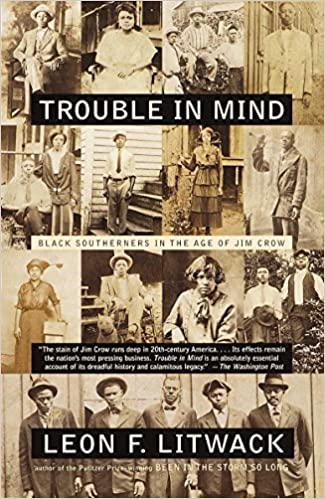 In April 1899, black laborer Sam Hose killed his white boss in self-defense. Wrongly accused of raping the man’s wife, Hose was mutilated, stabbed, and burned alive in front of 2,000 cheering whites. His body was sold piecemeal to souvenir seekers; an Atlanta grocery displayed his knuckles in its front window for a week.

With the same narrative skill he brought to the Pulitzer Prize-winning Been in the Storm So Long, Leon Litwack constructs a searing history of life under Jim Crow. Drawing on new documentation and first-person accounts by blacks and whites, he describes the injustices–both institutional and personal–inflicted against a people. Here, too, are the black men and women whose activism, literature, and music preserved the genius of their human spirit. Painstakingly researched, important, and timely, Trouble in Mind recalls the bloodiest and most repressive period in the history of race relations in the United States–and the painful record of discrimination that haunts us to this day.